(14 Feb 2020) Anne Bengtson, eceee’s Executive Assistant and the IEA Users TCP Secretary, has suddenly left us after a brief period of illness. 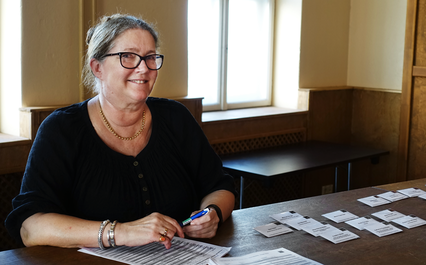 Her passing came as a devastating blow to all of us who know her, and we are many. We have been so touched by message after message we have received testifying to her warmth, sharpness and wonderful sense of humour, as well as her sense of integrity, duty and loyalty. She meant so much to so many.

Anne had a wonderful quality that made people trust her instinctively: Anne could keep a secret no matter how personal or awkward – what was told in confidence stayed with her.

Anne wore many hats, several of them at the same time.

Anne joined Borg & Co and the eceee secretariat in 2008 and ever since has been a close colleague and friend to the eceee community. She was closely involved in eceee’s development and daily management. Everyone who has ever been to one of the biennial eceee summer studies or any other of our events met Anne. You’d think she was “only” in charge of the backstage of the events, but you’d soon find out that this was where things really happened. More than one conference participant tried to boss Anne around as the “assistant”, but this was a mistake only made once. Once they realised who she really was and grasped the depth of her capacity, she was met with the respect she deserved. Anne was always happy to help and make even the impossible possible – and it could happen fast. Yes, Anne was in charge!

However, her history in international energy efficiency runs much longer back than eceee and continued along parallel tracks until present day. In the early 90s, Anne was recruited to the newly created International Energy Agency Demand-Side Management (IEA DSM) Technology Collaboration Programme (TCP) as secretary of its Executive Committee, a position she held right until the end, a period of almost 30 years.

At the time she joined the TCP, she was working with the Swedish Energy Agency and was a natural choice because of her language skills and her ability to bring organisation to even the most complicated matters. Over time, Anne became the institutional memory of the TCP, steering the organisation through periods of change such as the election of a new Chair, creation of new Tasks, or when new rules or reporting requirements were instituted by the IEA. Over the last two years, Anne played a key role in the revitalisation of the TCP as the User-Centred Energy Systems  TCP (Users TCP), embracing change but all the while ensuring that we did not lose sight of past successes. This was something in which Anne took great satisfaction and pride.

But Anne was not just the competent facilitator of international energy efficiency cooperation. Her resumé covers jobs such as restaurant and café owner.

We who have known Anne for decades also knew that she had gone through many hardships in life which only gave her strength. Even still she met new challenges with an open mind and new people with a positive attitude. This is something that made many of us quite envious. Where did she find that source of good spirit and love to spend on all of us?  Maybe it was that she had seen so many things before and managed to keep order of everything?

We will all miss Anne deeply. At the eceee secretariat in Stockholm there is a strange emptiness that lingers over us. She was there every morning before anyone arrived and would greet you with a quick smile once you entered the door and then she’d just get on with it. The next biannual TCP meeting in Vienna will not be the same without her. Anne organised and participated in the previous 54!

We are all heart-broken over her passing and can’t imagine how it must be for her family that were also in Stockholm. Anne’s immediate family was small but tight. Our thoughts are with her daughter Shirin, her son Yamin and his wife and two children and her twin brother Jan.

Nils Borg and Hans Nilsson for the eceee community, her colleagues at the office and the Users TCP.

Old batteries can be source of new energy