(eceee news, 6 Jun 2019) As the third day of the Summer Study closed on Wednesday night, our reporter Arthur Neslen reports from one of the many, many of conversations that took place. This one is about the important discussions that take place in kitchens to learn new habits. Discussions about sufficiency could kickstart a transformation in the way we live, addressing problems as disparate as over-work, loneliness and fuel poverty. 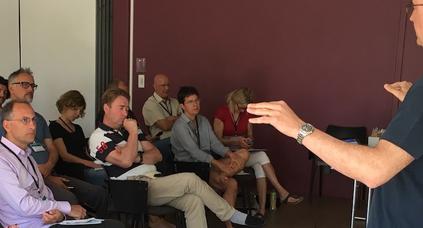 Energy use is about more than heating your house or washing your laundry. It can signify affluence, status, cleanliness, achievement or a good life passed down from one's parents.

More than anything, the fledgling (but fast-growing) field of energy sufficiency research suggests that it is a learned behaviour, influenced by feelings of group identity and belonging.

Vital as they are, energy efficiency improvements in isolation can be prone to rebound effects, with saved money reinvested in energy-wasting endeavours.

To contain global warming to 1.5C, people will have to keep their energy use within environmental limits, even if this can be a hard sell that excites few politicians.

One side of the ‘energy sufficiency’ concept involves meeting core energy needs in a way that leaves no-one behind. The other disavows the ‘luxury’ (or anti-social) squandering of energy.

But sufficiency could also kickstart a transformation in the way we live, addressing problems as disparate as over-work, loneliness and fuel poverty.

Today, a quarter of Europe’s energy goes on domestic consumption. A fifth of that could be cut by effective interventions targeting people’s behaviour, according to the European Environment Agency.

The good news emerging from the latest research showcased at the European Council for an Energy Efficient Economy in Toulon is that this may not be as tough a proposition as it sounds.

A ‘nudgeathon’ test reduced electricity usage in a Warwick University campus trial by 6.1 kWh per flat per week, and by 1.9 kWh per student per day.

The nudgeathon involved explaining the problem of energy overuse, giving practical advice on how to address it, and empathy and ideation stages in which personal solutions were devised.

In a ‘Living Lab’ experiment thought up by the University of Geneva, the preliminary results of a test involving 300 households across eight countries were even more dramatic.

Before the tests began, participants were encouraged to talk about what it meant to be clean or unclean or hot and cold, and whether pressures from peers, employers or the advertising industry added to their wellbeing.

Over a four week period, participants then reduced their indoor temperatures by an average of one degree and their laundry routines by one cycle per week, without any inconvenience or discomfort.

“We questioned what was really comfortable and healthy,” said Marlyne Sahaklan, the study co-author. “We asked [participants] to consider heating people - not spaces - and we saw them wearing an extra layer rather than turning up the heat.”

The laundry exercise also had the side effect of “contesting the gender dimension of who does laundry” and reconsidering when clothes were dirty, she added.

Less tangible factors can also encourage energy saving acts. People who identify with groups such as their region, nation or with Europe feel more responsibility to take action limiting their energy use. according to research from the Norwegian University of Science and Technology.
An ‘Echoes’ survey of 18,000 people across Europe – the largest yet – tried to weigh how norms, expectations and group dynamics affected energy consumption.

It found that, after environmental identity, the most important influences on a person’s energy use were their sense of what other people expected them to do, and what others were doing themselves.

“The more you identify with a social group, the more you are willing to contribute to the goals of that group,” said Christian Klöckner, the study author.

“We [also] found that if you identify with your municipality, country or the EU, that also has a positive impact on your feeling a responsibility to do something for the energy transition.”

In two Scandinavian cities hit hard by depopulation and decline – Samsø in Denmark and Malmö in Sweden – Klöckner found that resistance to energy transformation was overcome by informal and inclusive ‘kitchen discussions’ and by harnessing local traditions involving windmills.

The corona crisis: A catalyst for climate action?