(eceee news, 5 Jun 2019) Four aspiring green entrepreneurs entered the Hyères Dragon’s Den yesterday evening. But unlike the UK TV series on which it was based, the real winner was the idea of energy sufficiency itself, according to Joanne Wade, eceee’s vice president.

“We’re planning to take all these ideas in our policy papers to engage the European commission and national and local governments,” she said. “These were really positive ideas and we want to use all of them as very concrete proposals. There is something in there that could work everywhere.” 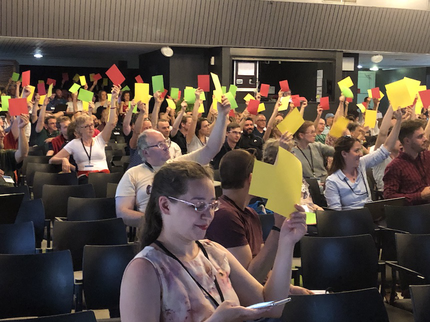 Each contestant pitched their proposals for food, transport, housing and holidays to the four-person panel and a packed hall voted with green, yellow and red cards for their favourite.

Finally, the panel awarded their “policy capital” to the best ideas for popularising energy sufficiency, or the expansion of a safe space between people’s access to core energy services within the outer limits of planetary resources, notably CO2 levels.

Dr Phil Grünewald of the Oxford University environmental change institute began a popular push for communal workplace cooking sessions by asking “What has the US ever done for us?”

“Frankly,” he replied, “I believe it’s led us to unsustainable, unproductive, unhealthy food practices that have made made us mentally ill and lonely and for all of that, I blame food.”

Instead, he proposed expanded lunch breaks with cooking classes facilitated by nutritionists, environmentalists and chefs. Gallic opposition though, proved formidable.

“Food is a very sensitive topic for French people,” said the French dragon, Benoit Lebot of IPEEC. “I feel priority should be given to bike riding.”

His scheme would cap and trade excess mileage on polluting vehicles, as measured by technological gadgets in people’s cars, allowing for a hypothecation to poorer drivers.

Anja Bierwirth, of the Wuppertal Institute proposed a dozen annual energy-sufficiency days across Europe to combat what she called the “absurd but patronising alarmism of a ‘stone-age future’” that German tabloid columnists had used to denigrate ideas of energy sufficiency.

These would be days free of cars, plastic and adverts, as well as open homes and goods exchange days. The idea was greeted with a sea of green cards.

In the end though, it was Hasselt University’s Professor Griet Vierbeek who won over the majority of the dragon panel with a pitch to overhaul housing taxation, by using tax tariffs. 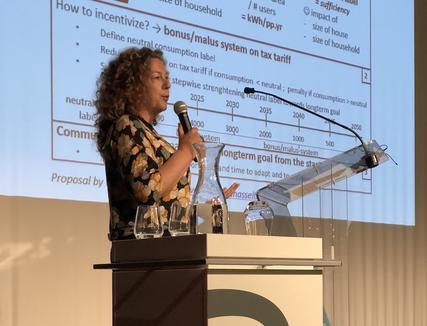 These would take account of a household’s size and multiply its energy consumption by the floor space to provide a kWh per person, per year figure. It would then be measured against a carbon neutral consumption benchmark to determine whether people paid a higher or lower tariff.

Under current energy efficiency labelling schemes, small energy-inefficient houses are often taxed more than large renovated home. “If you just look at the top of an energy label, you will create problems from a social justice point of view,” Vierbeek said.

The corona crisis: A catalyst for climate action?